Having been raised monolingual, I know what it is like to learn a second language as an adult. It was a lot harder than I thought it would be, and although I am quite fluent, I don’t consider myself perfectly bilingual. Teaching English to children for many years, I saw firsthand how easy it was for them to pick up the language at such a young age, and how natural it was. I thought it would be the same for me when I decided to learn, but I was wrong. For this reason, I am doing my best to bring my children up to be multilingual from the very start, so they won’t experience the same difficulties I had. That, and of course the many other many benefits of speaking multiple languages.

I am an Australian, living in Italy with my Italian husband and two young boys who are now two and four. We have raised them bilingually from birth, speaking English and Italian using the OPOL method. They are also learning Spanish as a third language. However, neither my husband nor I speak Spanish, so we needed to seek outside help.

We have a “playmate” for our boys. A young Argentinian girl, Ana, who comes to play with them in the afternoons, a few times per week. She started with our eldest son, just before he turned three, and not long ago our youngest joined in. 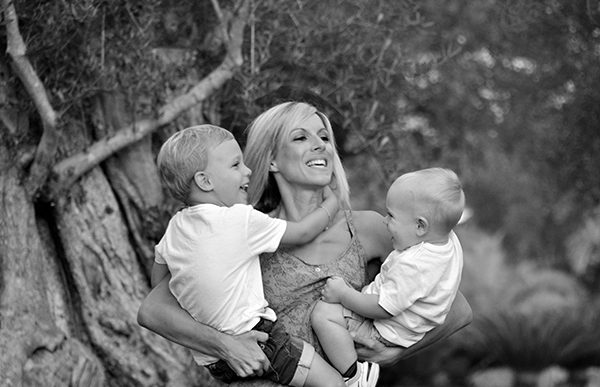 Italian is the community language, so it is obviously the language with the most exposure. Our boys go to Kinder and Nursery where the teachers only speak Italian. Their father speaks with them in Italian, and all of their family and friends here where we live, speak Italian too. We don’t have to worry about their Italian exposure as they get a lot of it.

Ana comes most days for a couple of hours in the afternoons, when the boys get home. Although it isn’t a lot of exposure, it works out to be around 6-8hrs per week. During this time, I never hear any silence. I am lucky that she loves to talk. They play together, they sing, and she reads them stories. They spend time together playing and talking with each other.

I am the only source of exposure to English they have. I am a working mum so it sometimes seems like I don’t have enough time with my children. However, I make sure that the time I do get to spend with them, is used effectively. I make sure I have some one on one time with each of my children every day, and spend time doing activities with them. It could be playing a game, or doing some arts and crafts, or it could be simply going for a walk and talking about our days. We also read English books together a lot, and every night we spend at least half an hour reading bedtime stories.

Fluency in each language

Our four year old speaks Italian and English to a native level. Even with Italian as the stronger language out of the two, his English is still to the level of native English speakers his age. With Spanish, he is not completely fluent yet; however, it has only been just over a year since he started learning. He understands everything though, and has no problem holding a conversation. With the vocabulary he lacks in Spanish, he usually fills in with Italian. I have no doubt that he will be fluent soon enough.

Our two year old has started speaking a lot recently. His Italian is definitely the stronger language, where he has a strong vocabulary and can form proper sentences. He can communicate in English, however his sentences are often broken. With Spanish, he can follow instructions and understand most things. He doesn’t talk in Spanish though, unless he is counting, or singing songs.

Making up for lack of exposure

As Italian is the stronger language, we need to find other ways to have the boys exposed to English and Spanish. Most of the research on language exposure for multilinguals says that children need around 25-30% exposure to the language to become fluent. They definitely do not get this in Spanish, and they probably only just make this up in English. We try to make up for the lack of exposure in a variety of ways.

TV only in the Minority Languages

Our children never watch Italian programs at home; they are always played in English or Spanish. I always try to offer a program in Spanish first as I know that is the language lacking the most.

We have downloaded many games and apps in Spanish. Though we try to limit their time using technology, I have no problem with letting my children on the IPad if he will use one of the language apps. We try to use screen time to our advantage. These games and apps have been a great way for me to test my four year old’s Spanish skills. I hear him talking to Ana in Spanish, and I know it is Spanish because I cannot understand it. However watching him use a language app, answering questions and repeat answers, gives me a little bit more reassurance.

We also have some apps in English as our eldest old is starting to learn to take an interest in reading. While we read books together a lot, we have some great interactive apps that let him practice.

We often play music in the minority languages. We are quite lucky that our boys love Spanish songs, so they request them often. Music is such an effective way to learn a language. Though my two year old doesn’t speak much Spanish yet, he can sing the songs he has learned, word for word. It is amazing!

We play “teacher”, where my four year old pretends to “teach” me a language. He knows I don’t speak Spanish, so he tries to teach me some words. It is quite cute.

Chontelle Bonfiglio is an Australian currently living in Italy with her husband and two young children, who are being raised speaking English, Italian, and Spanish. With a background in Social Science and Teaching English as a Foreign Language to children, she writes at BilingualKidspot.com about her experience living and teaching abroad, and raising her children with multiple languages.