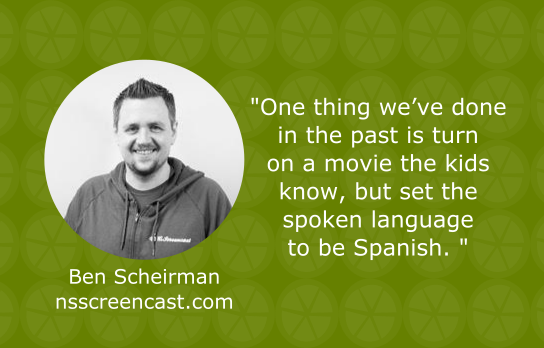 Ben Scheirman is an independent software developer from Houston, TX. He runs nsscreencast.com, producing a screencast on iOS development each week. He’s a father of 5 children and a moderately capable Spanish speaker. We invited him to share a little bit about his bilingual family.

Q: Why is it so important for you to raise your kids to be bilingual (or multilingual)?

Learning Spanish opened a lot of doors for me (including meeting my wife). I’ve always found it useful while traveling to know a little about other languages, and I’d like my kids to grow up knowing about our diverse global culture.

Q: What has been your biggest struggles at different stages?

Consistency. We don’t speak Spanish enough in the household, and most of our kids have resisted when we do. Being more consistent would have been helpful.

Q: What has been the most surprising or rewarding part of the process?

Seeing the kids speak to / understand my wife’s extended family when they are speaking in Spanish.

Q: What is your best tip in raising bilingual children?

We certainly aren’t very diligent about speaking Spanish in the house, but we try.

One thing we’ve done in the past is turn on a movie the kids know, but set the spoken language to be Spanish. They’d complain at first, but eventually they’d watch it and infer what is being said based on the action and their prior knowledge of the movie.