Lessons from a Trilingual Immersion School 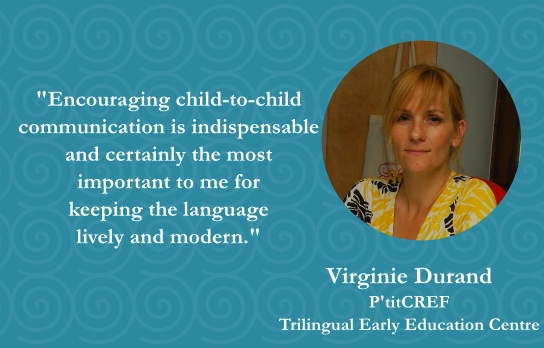 Virginie Durand is originally from Touraine, a region in the Loire Valley in France. She graduated from University Francois Rabelais Tours majoring in Modern Humanities and Russian language and followed with Khagne and Hypokhagne courses in humanities and Russian. In 1998 Virginie came to Russia to develop her Russian language skills. In 1999, she began working at CREF as a course development coordinator and a French teacher for children and adults. In 2003 Virginie and Bertrand Coue, a proprietor of P’titCREF, initiated the whole P’titCREF project. Today she is a Headmistress at P’titCREF Trilingual Early Education Center and she is also a main coordinator of the franchising network. Virginieis married and a mother of two daughters.

Q: How would you advise concerned parents reluctant to give their child a trilingual preschool education because they themselves know only one language? What would you say to those who think that a child should be able to first speak his/her native language before learning a foreign one as they worry about their child’s speech development?

As Fitzhugh Dodson, a specialist in child rearing, said, “Everything comes into play before the age of six!”

It is not rare for parents to be a bit worried that learning one or especially two foreign languages will hinder the development of their child’s native tongue. This is not usually the case however! We should not be afraid of children learning foreign languages. Young children learn naturally while having fun. They have an innate and natural aptitude for understanding and for integrating grammar and syntax. This allows them not only to learn about other cultures and other ways of thinking, but we also often see these children develop better in logic and mathematics compared to their monolingual counterparts. They learn to adapt to different environments and to respect differences, not to mention developing open-mindedness.

It is only in the rarest of cases when it is actually preferable to wait a little before the introduction of a new language.

Many parents ask me if their child will mix languages, and I tell them that they will obviously mix them, but no more so than when I, as a Frenchwoman, do with my Russian-speaking friends, for example. Initially, the child will use the linguistic tools which seem the easiest and the word that first comes to mind. Then it will easily sort itself out and they will no longer get mixed up. We should not see this mixing as problematic but as a real asset for the child!

Q: What innovations in language teaching do your teachers use to help young students become trilingual?

The important thing in my opinion is not to innovate, but to make the right educational choices. Classes are held in total immersion – each teacher/assistant speaks only his/her native language (1 person = 1 language). This allows the children to quickly find their bearings and to not feel lost in a multilingual context. (It is a principle that is strongly advised in the homes of multilingual families.) Translations are banned in school; the child must feel obliged to understand. On the other hand, the groups are mixed and this is probably our greatest strength – the teacher is not the only one speaking a foreign language. Learning is not linearly and abstractly done from adult to child (which serves no purpose if the child does not understand what is happening), but activated by the children themselves when they spontaneously participate. The foreign language thus becomes a concrete and active language – it is a language used for communicating and for playing with other children. Learning makes a lot of sense!

We can, however, say that our programme is innovative. The teachers use textbooks and other materials written and edited by our school. While this programme follows the objectives of the national curricula of England & Wales, France, and Russia, our teachers share a common weekly theme to avoid cacophony. Academic knowledge is thus taught at the same time, allowing children to easily understand the taught concept through repetition and a variety of learning methods.

Q: Using your own experience, what are some specific things parents can do to help their children maintain multilingualism at home?

The task is obviously more difficult if multilingualism does not exist in the family or in their circle of friends. That said, I do not think it is necessary to put such pressure on parents, let alone on the children. Young children have a lifetime of learning and developing ahead of them, and if the home environment is not multilingual, simply try to promptly create external multilingual opportunities– by participating in extracurricular activities or playgroups in a foreign language. The important thing is for the young child to communicate and play (and not necessarily learn). The ideal would of course be to advise parents to use external sources, such as a foreign nanny or university student who would regularly come to play, discuss, read stories, etc. to help overcome any linguistic lack in the family. Also, while traveling on vacation, parents should not hesitate to enroll their children in vacation clubs with fun activities. There is no better language teacher than a native-speaking friend.

All the audio-visual media available (games, films, songs, applications, etc.) can be interesting, albeit static and one-sided. The child listens but does not participate – but at least this can help him/her to memorize vocabulary and sentence structure.

Q: How would you advise monolingual parents whose children get many more hours of their native language and are less exposed to the two other languages? How can they strengthen the weaker languages?

This is a problem that can also occur in multilingual families where an imbalance between the languages exists. This is also a problem that I personally have myself. I live in Russia, my husband is Belorussian, and we communicate with each other in Russian at home while speaking our native languages to the children. French is clearly in the minority. In my case, I obviously try to speak and play with my daughters as much as possible, but I also am always looking for fun activities so that my young girls are in a more French environment.

I would therefore give the same advice to parents as in my previous answer: find activities in foreign languages, facilitate meetings with foreign children (vacation clubs, friendly snacks, etc.). I also gladly show them cartoons and play them songs in French. Again, the key is to recreate a natural context: the child should play, run, shout, sing, and even bicker in that language. Encouraging child-to-child communication is indispensable and certainly the most important to me for keeping the language lively and modern and not adult-like or frozen.

If the task is to balance the difference in exposure to the languages as quickly as possible (as can be the case for an eventual family move or enrollment in a foreign school), it may certainly be necessary to enroll in early language courses and/or to use an external person (as mentioned above).